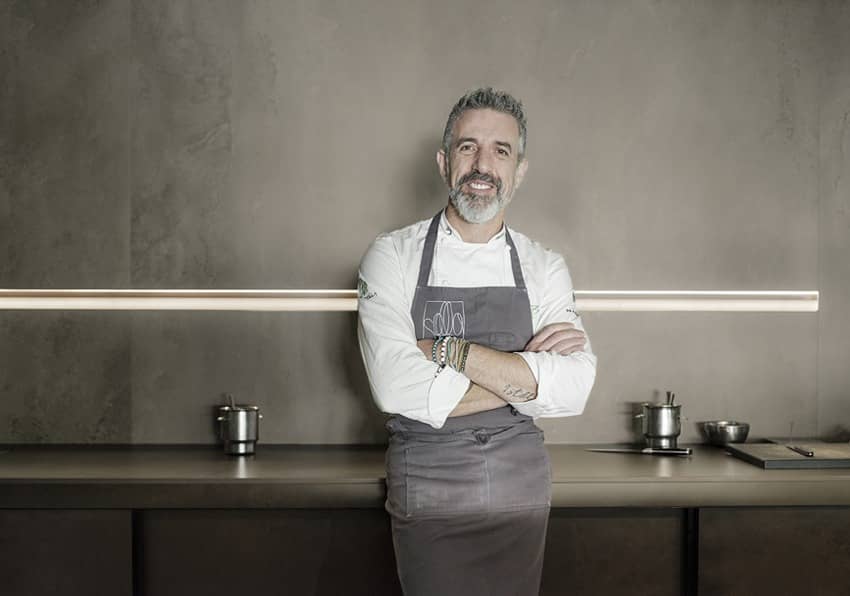 He is one of Spain’s finest chefs. Renowned for his good-natured, affable character and his avant-garde yet no-nonsense cuisine, he runs Casa Solla, the first restaurant in Galicia to be awarded a Michelin Star, an accolade that has been renewed each year since 1980. Today, he is talking to Inalco Citizens, offering us an insight into his background and trajectory.

What did it take to get a Michelin Star back in the 1980s? After taking over management of the restaurant, is there anything left of that original cuisine?

Basically, that first Michelin Star was down to my parents, José and Amelia. Since the restaurant opened in 1961, they remained true to a philosophy based on first class standards and professionalism, working hard to offer the very finest Galician produce…and their dedication and determination was rewarded by the Guide’s inspectors.

My career began in the early 1990s; at that time my attention was focused on observing and taking in my parents’ skill and know-how, their attention to detail, the recipes…albeit with the clear intention of one day being able to add my own personal touch to Casa Solla. This came about in 2003, after several years of father and son working side by side, I took over ownership and embarked on a new era for the restaurant, but without forgetting the past…it’s impossible to forget the past when it has created so many good things.

Indeed, you grew up in a truly culinary environment thanks to your parents and Casa Solla, although you didn’t immediately become a chef, but instead studied a degree in Business Science. What led you back to the family roots?

My parents taught us that gastronomy was essentially a way of life. They started taking us out to restaurants from an early age, and of course, it was a basic part of our daily lives at home. Yet originally, I had no intention of working in the family business, and started studying Business Science. I took the decision to work in the restaurant in my third year at university, but only to give my parents a hand.

But Casa Solla soon worked its magic on me. I started off in the dining room, and then worked as a sommelier – a figure that at the time didn’t even exist in restaurants in Galicia – and eventually in the kitchen. Without even realising it and definitely unintentionally, I self-taught in the three key areas of a restaurant.

When you started your culinary training, you studied under Ferran Adrià , what are your memories of this period?

There’s no question about it, the opportunity to spend time with Ferran changed my vision of gastronomy. It is not a question of learning recipes or formulas, but rather new ways of doing things; cuisine that is free from restraints and that opened up a whole new horizon for me. It was no longer a question of simply recreating the same recipes as before, but rather of adding your own character and personality to everything you do…The best thing about that period was definitely discovering a sense of freedom that I was previously unaware of.

You are an agent of innovation in gastronomy, and a pioneer for a number of projects. How do you innovate in your dishes? Where does your inspiration come from?

Casa Solla is a dynamic restaurant that is constantly reinventing itself. We have just celebrated our 58th anniversary and we can safely say that we have never been lulled into a sense of complacency. Innovation is an innate part of what we are, and this is also reflected aesthetically, in the premises, our team, and naturally in the kitchen.

Our dishes are inspired by the greatest thing any chef could wish for: the produce, and in this sense, Galicia undoubtedly has a special role to play. There can be no greater source of inspiration than fish, vegetables, flavour, contrasts…nothing inspires chefs more than these. It is also essential to realise that you are living in a constantly changing world; society is evolving and you either change with it, or you and your ideas will get left behind.

Thinking about the meaning of MDi (Minerals, Design, innovation), what does each letter mean to Casa Solla?

M, Minerals: the product, the authentic foundations of our cuisine.

D, Design: the design, the recipe, the dish.

Right now, what would be your quintessential MDi dish?

You always tend to think that your latest dish is the best, the most innovative, probably because it is the most recent. It’s difficult to choose just one, but perhaps a dish that we call un puñado de percebes – ‘a fistful of goose barnacles’. It’s incredibly difficult to come up with a dish based on such an iconic ingredient, because any comparison with simply steaming the goose barnacles would put your dish at a disadvantage. So, rather than changing the way they are cooked or presented, simply rethinking the way we eat them is actually an exciting new take on this dish. This is probably our best MDi to date…tomorrow is another matter.

What has the renovation of your kitchen with MDi by Inalco meant?

As I said earlier, we are a dynamic restaurant. The kitchen is the most essential of our spaces and right from the start my intention was to make sure it is a practical and functional space, where both my team and I can work and move around comfortably.

At the start of the year we considered giving it a makeover. On the one hand, we needed a more contemporary image, and on the other, we were seeking functionality. We were looking for continuous work surfaces, and also not having to worry whether a hot pan could burn the worktop or a knife could scratch it: the idea was to find a balance between durability and beauty, because working in a minimalist and attractive surface will project those same qualities on your work; your dishes will reflect that essence and everything will be so much better.

The MDi by Inalco surfaces have enabled us to combine walls, floors and furniture, all with the features we were looking for.

You chose Vint collection. Are there any other collections that you would also like to have used?

Choosing just one was probably the most difficult thing of all. There were endless combinations that would have been suitable for our kitchen; in fact, we chose another one for our new project in Santiago, and we look forward to choosing others for future ventures.

This year Casa Solla is celebrating its 58th anniversary. The average lifespan of a restaurant is said to be 15 years, what is the secret behind your success?

I don’t think there is a particular secret or formula for success. In my opinion, it’s all down to commitment, sincerity and the desire to continue changing and evolving at the same pace as society, our customers and of course, to keep on innovating in all aspects of the restaurant.